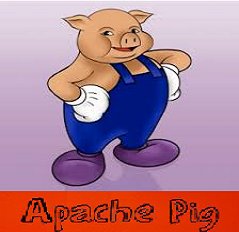 Apache Pig is a high-level platform for creating programs that run on Apache Hadoop. The language for this platform is called Pig Latin. Pig can execute its Hadoop jobs in MapReduce, Apache Tez, or Apache Spark. Pig Latin abstracts the programming from the Java MapReduce idiom into a notation which makes MapReduce programming high level, similar to that of SQL for RDBMSs. Pig Latin can be extended using User Defined Functions (UDFs) which the user can write in Java, Python, JavaScript, Ruby or Groovy and then call directly from the language.

The Grunt shell of Apache Pig is mainly used to write Pig Latin scripts. Prior to that, we can invoke any shell commands using sh and fs.

Step 1 - Change the directory to /usr/local/pig/bin

Using sh command, we can invoke any shell commands from the Grunt shell.

Using the fs command, we can invoke any FsShell commands from the Grunt shell.